VICTORIA The Coins of British India : One Rupee
The Rupee coin has several Reverse designs, which can be easily identified by examining the flower at the very top of the coin( at 12'o clock position).

Reverse I - The top flower is open with long, curved petals. The "1" in the date has a flat top.

Reverse II - The top flower is closed.
The "1" in the date has a slanted top.

Reverse IIa - Variant of Type II on a few 1862 Rupees.Similar to type II, but the flower buds above the "E" of "ONE" and above right of the second "E" of "RUPEE" have a pineapple-like pattern. 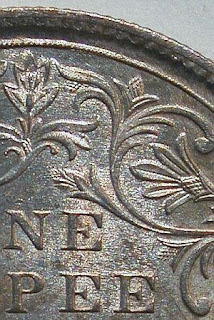 Reverse IV - Variant of Type II . This reverse type is so far known to exist on the Bombay Rupees for the years 1879, 1880, 1881 and 1882. Most Recognizable difference in Reverse IV type is in the lotus flower to left of the date. The type II flower has five petals while the type IV has three larger petals.

In 1862 there was a variant of Reverse Type II referred to as Type IIa. It is very similar to Type II. Two flowers have a "pineapple" appearance on the Type IIa. The easiest to identify is the flower just above and to the right of the last "E" in "RUPEE". Type II does not have a flower bud, while IIa shows a pineapple-like bud. Also, a little above the "E" in "ONE" the flower bud appears pineapple-like on the Type IIa. 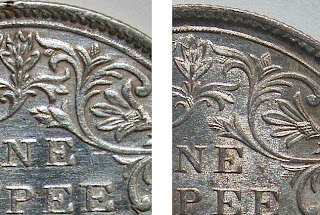 Detail of Reverse I 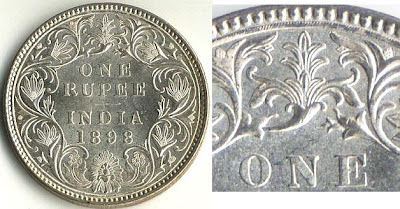 Detail of Reverse III
In 1862 there was another reverse variant called Reverse Type III. The top flower is very distinctive with pointed petals. 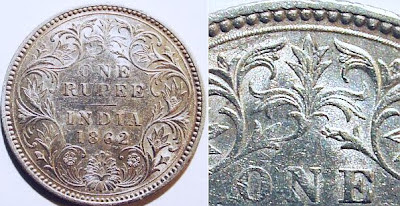 Comparision of Details of Reverse Type II and Type IV

In 1879-1882 there was a variant of Reverse Type II referred to as Type IV. It is very similar to Type II but has numerous small differences. The most recognizable difference is in the lotus flower to left of the date. Type IV has three large petals, while type II has five smaller petals.